In 2014, an article by OkCupid’s Cofounder sparked up conversations when they revealed that Asian American men were deemed as the “least desirable” choice on their online dating platform. However, this came to no surprise to many readers. The phenomenon of discrimination and racial stereotypes against Asian American men is often discussed and portrayed in media. In 2017, American Television host, Steve Harvey, laughed hysterically as he joked about a book titled How to Date a White Woman: A Practical Guide for Asian Men. He stated the book would only contain one page saying:

“Excuse me, do you like Asian men? No. Thank you”

Continuing his joke, he proceeds to impersonate an African American woman’s response to dating an Asian man, “I don’t even like Chinese food, boy […] I don’t eat what I can’t pronounce.” As the camera panned towards the audience, viewers can be seen exhibiting a mix of reactions. Though there were many audience members laughing at the joke, the few who understood the controversy of the ridicule expressed their uncomfort with frowns.

This is just one example of blatant discrimination against Asian men in today’s entertainment, where these types of jokes have become normalized. So is it surprising to hear that Asian men are found to be the most undesirable dating group? No. But why is this a known stereotype? How did it begin? To better understand why dating is so difficult for the typical Asian American male, we must dive into history and understand how it became a social norm in today’s modern society.

Where it all Began

The Chinese immigration wave to the West Coast began in the early 1800s. The United States opened its doors to immigration in order to bring in cheap labor sources. However, because the law restricted immigration for Asian women, the population of Asian men in the states became intimidating to the US government. This resulted in the implementation of citizenship-revoking laws for fear of interracial marriages (Lau, 2015). Eventually, supporters of the law created propaganda campaigns to depict Asian men as ‘sexually deviant, asexual, effeminate’ predators (Shek, 2006). 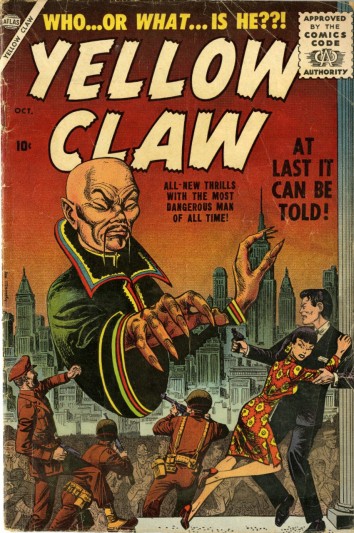 Portrayal of Asian Men in Hollywood

Fast forwarding to early American film, one of the most famous depictions of Asian men was The Mysterious Dr. Fu Manchu (1929). His character was a supervillain who tortures all women. These women would then be saved by heroes who are White males, of course. Another successful Hollywood film was Sixteen Candles (1984). Long Duk Dong was the only Asian character in a dominantly White cast. His character was depicted as geeky, sexually-frustrated, and socially awkward with no sexual appeal. Throughout the movie, the sound of a gong would play with each of his appearances as if it was a punchline to a joke. In one scene of the film Dong was seen hitting on a female receiving an awkward response. In another scene he was being kicked on the ground by not only the main male lead, but also elderly characters. As he was on the ground being kicked, he said “No more yanky my wanky… the donger needs food!” This was not only a joke to show that his character was so weak that even elderly people could beat him up, but also to make light of the situation. If he was able to laugh at the situation, does that make it okay? It is easy to see how non-Asian viewers might watch this scene and feel a sense of superiority over those of Asian descent; viewing them as evil like Fu Manchu or weak and awkward like Long Duk Dong.

It was not until the legendary Bruce Lee became popular in the mainstream, that the negative portrayal of Asian American male characters could begin to change in Hollywood. He was the first Asian actor to truly depict a masculine character. But before he landed his famous role in Enter the Dragon (1973), he too faced racial discrimination in the entertainment industry. Bruce Lee auditioned for the lead role in the television series Kung Fu (1972-75) but was unsuccessful in landing the role due to him looking “too asian” even with his quarter Caucasion descent (Vang, 2014). 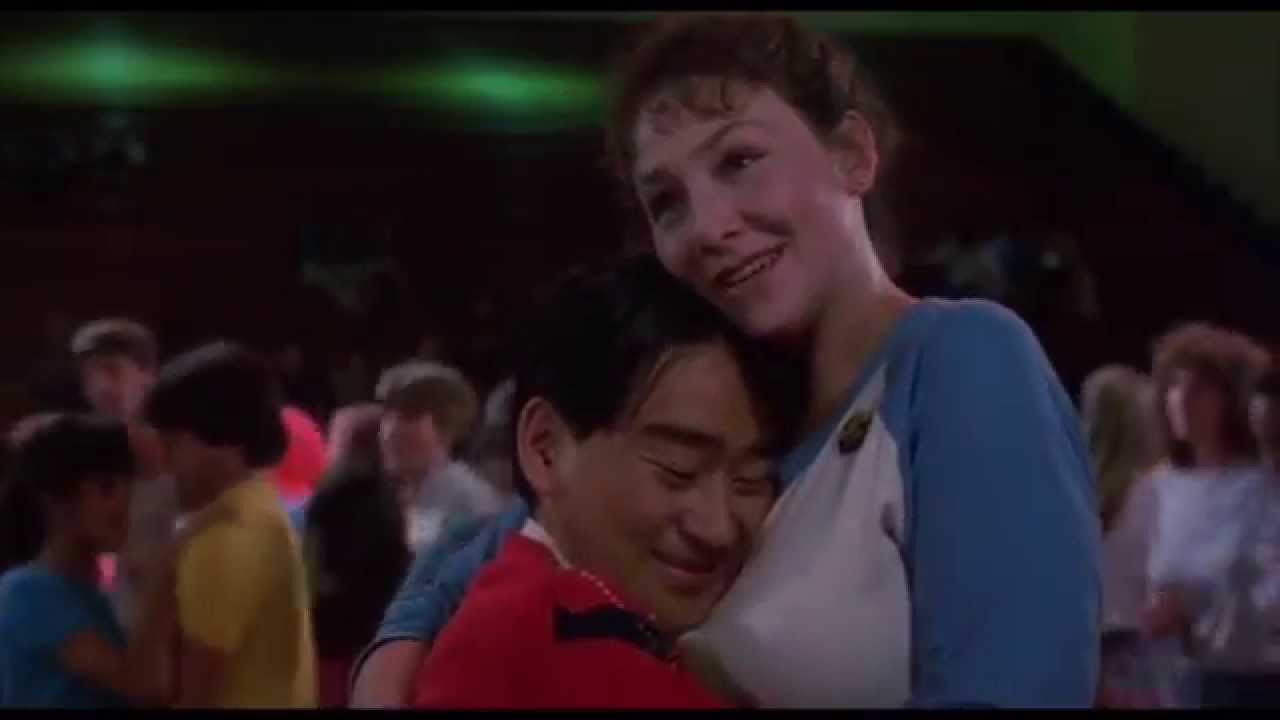 A study found that there are seven main categories when it comes to Asian American male stereotypes. These include the following:

The findings suggest that interpersonal deficits ranked as the most common stereotypes in Asian American males (Wong, et al., 2012).

As these stereotypes continue to stay prevalent in today’s society, it does not make the dating life easier for the typical Asian American man. It might be easy for some people to say “Hey, Asian Americans are the model minority! It should be easy to find a romantic partner since Asians are so successful both economically and academically.” However, this is not the case at all. A study by Grace Kao, Kelly Stamper Balistreri, and Kara Joyner suggest that socioeconomic success does not equate to romantic and social acceptance.

Their evidence further shows that the higher the education and income of Asian American men, the more likely they are to actually have little to no experience in romantic relationships during their adolescence and young adulthood (Kao, Balistreri, & Joyner, 2018). Instead of focusing on their social lives, these young men focus on their academics. However, this may inadvertently feed into the stereotype that Asian American males are romantically inadequate due to their lack of experience. 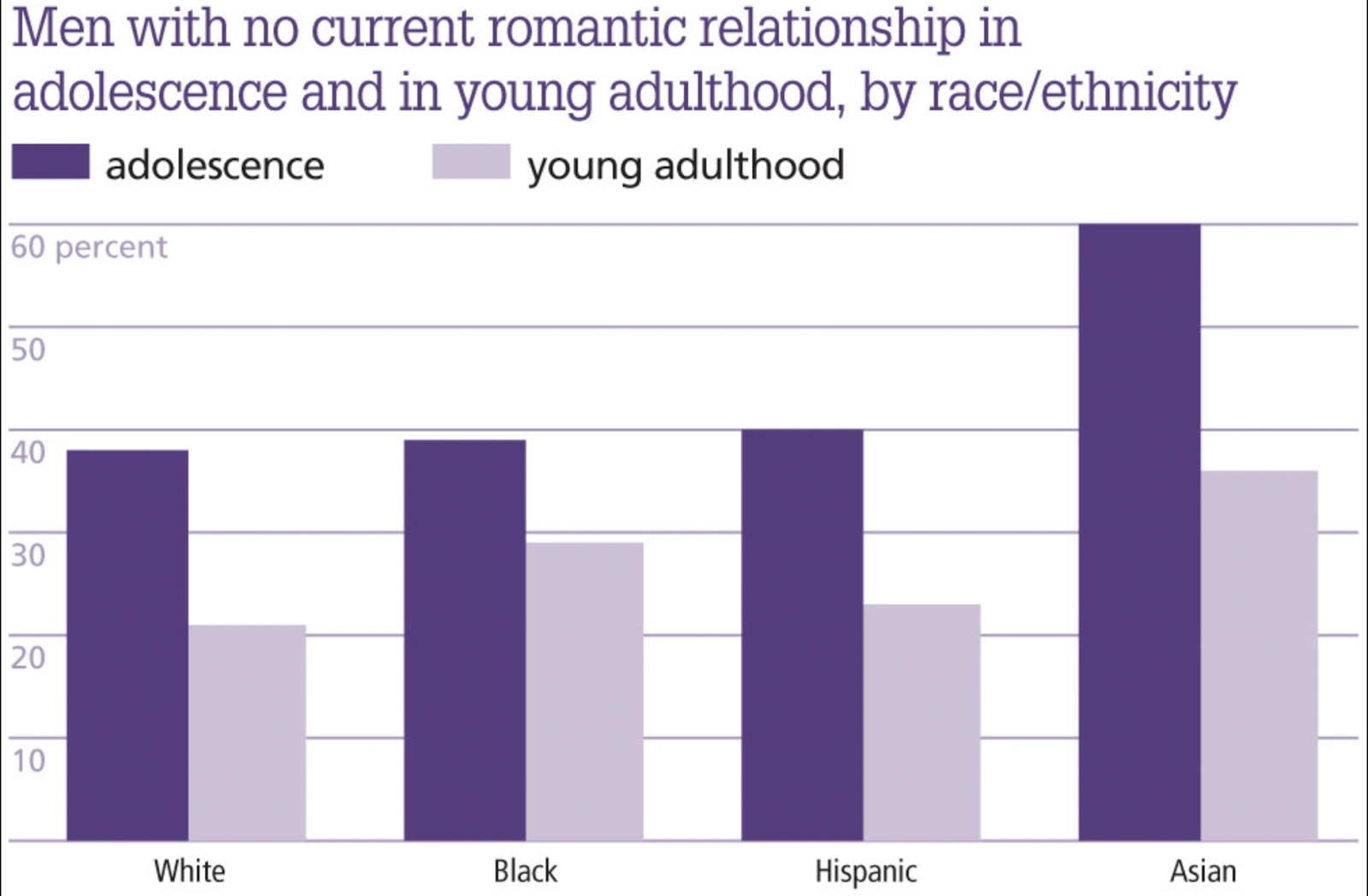 The 3 Levels of Action for Asian Men

“Dating as an Asian man in America is, to put it simply, not fun. While I’m happily in a relationship now, I’ll never forget how invisible I felt — and how I imagine many other people who look like me feel, too.” – Mike Cabellon (https://www.today.com/popculture/essay/asian-american-man-dating-invisible-rcna27189)

In a video created by YouTube personalities, The Fung Bros, they discuss Mike Cabellon’s article about the difficulties of dating as an Asian man in the modern world. The brothers then explore their perspectives on the three levels of action that Asian men can consider to improve their dating success: micro, mid, and macro.

Micro — INDIVIDUAL – Based around yourself and what you can change about your looks and lifestyle to appear more masculine and attractive. (Ex: Clothes, hairstyle, fitness, education)

Mid —- ENVIRONMENT – Happier Abroad; Don’t change yourself for others. Instead, change your geographic and social location to somewhere where your qualities are better appreciated.

Macro —- OUTSIDE TRENDS – Identify what trends are popular that you can benefit from. (ex: K-Pop styles, learning the language of a powerful and growing economy)

The Fung Bros wrap up their podcast with a powerful message. While most men focus and dwell on just one level of action, it is essential to consider all three levels of action to achieve stronger results.

Now that you’ve read about the reasons behind the challenges Asian men face in the dating world, do you think you can be more successful in your dating game if you were to utilize and improve on all three levels of action?

AngryAsianMan. (2017). Steve Harvey: “Do You Like Asian Men? No.” [Video File]. Retrieved from https://www.youtube.com/watch?v=7gjVyM2tajA.

Cabellon, M. (2022, May 11). As an Asian American man, The Dating World Made Me Feel Invisible. Retrieved December 16, 2022, from https://www.today.com/popculture/essay/asian-american-man-dating-invisible-rcna27189

FungBrosComedy. (2022). We Need To Talk About Dating As Asian Males [Video file]. Retrieved from https://www.youtube.com/watch?v=0aiFBiuGiVU